Lesson number one of today is not to cook in the vestibule of your tent, but more on that in a bit. I moseyed down to the Andover General Store once more for coffee, toast, an omelette, and blueberry pancakes. Sprout and Turducken joined me, so I got to say my goodbye for now. At 8 I hopped in the car with David the innkeeper and I was soon hiking. The miles were uphill but smooth so they flew by. I quickly realized I would be tempted to go for my Plan C for the day, getting to this campsite. I climbed up to Baldpate Mountain, meeting Copperhead on the way. She's a bright red-headed section hiker going north, and she told me about a good stealth camping spot in the White Mountains ahead.

At the bottom of Grafton Notch, the AT's jurisdiction changed. From here forward, the trail is no longer managed by the Maine Appalachian Trail Club (MATC) and is now cared for by the Appalachian Mountain Club (AMC). I've heard mixed things about the AMC. For starters, they charge hikers to stay in many of their lean-tos. Where does the money go? To pay the caretaker at the shelter. And the caretaker, in turn, collects money. It's like a snake eating its tail. I'm oversimplifying here, but still. Anyways, I climbed the 2500 feet up Old Speck Mountain, then descended to my first AMC shelter. I checked it out but passed it by since I figured I could make it to the free campsite down the mountain. As I began that 2.6-mile trek, it began to lightly rain, as is usual in the afternoon. The steeply downhill trail became slippery, and I slipped on a particularly damp rock. Scraping my arm and hand, I unleashed an expletive with gusto. The forest absorbs these things. But as luck would have it, I walked (slid, really) another tenth of a mile and was face to face with what I think was an Outward Bound group or something. I apologized and skedaddled along. 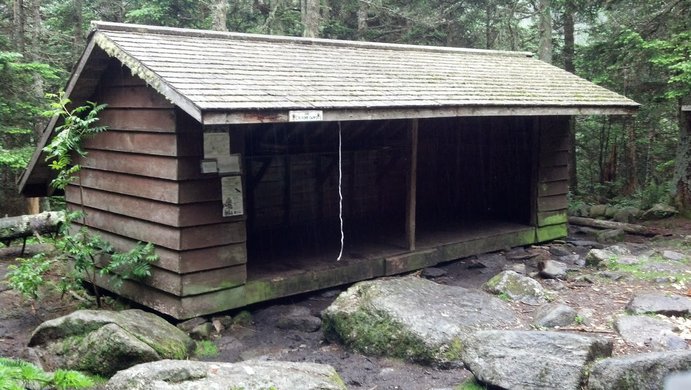 The rain intensified and it was slow going to finally get to the campsite. I found puck, the sobo carrying a hockey stick, with his tent already pitched. I did likewise and soon I was naked in my tent, wiping away the buckets of water from the rainstorm. I did everything I needed to for the evening, then got ready to cook. Everyone has told me it would be fine to cook in my tent so I lit the old stove up. It felt pleasantly warm in my tent immediately. The water finished boiling so I removed it from the flame, but there was still alcohol in the stove to burn. The flame was still there, so I panicked, trying to blow it out then douse it with my towel. I succeeded in knocking it over and unleashing an even larger flame, so I threw the whole stove into the rain. But who has two thumbs and is eating warm rice? This guy.