Just a reminder that "miles today" refers to net miles traveled correctly on the AT on this day. Moving on. I started today off by deciding not to go up to the peak to watch the sunrise. The first thing I did in the morning would have been getting out of my comfy, clean sleeping socks and into my mud-hardened hiking socks for a trip up the steep slope, so I decided to just go ahead and get ready for the day as usual instead. I started off with my oatmeal jostling in my belly on the way down Killington. I considered just sticking with pop tarts from now on. I was moving along at a good pace to have a lot of time in Rutland today when I saw a sign that said the trail ahead was washed out. I figured this must have been the re-route all the nobos were talking about. I decided to take the detour, hiking for about 35 minutes before realizing there were no human footprints, only those left by vehicles. Cursing everything in sight, I turned around and stormed up the stupid dumb gravel road. Returning to where I was, I saw an inconspicuous white blaze on a tree. I cursed at the absent trail maintainer and took the trail, with over an hour of wasted time to my name. I finally came to the real re-route, a result of Hurricane Irene a couple years back. Frustrated, I just walked on the "closed" section of trail. Washed-out bridges had been replaced by tree trunks and everything was hunky dory. That was, until I came to a stream crossing. I bent down to fill up a water bottle when I heard a plunk in the stream. I saw my phone in its plastic bag floating away, and I sprang across the rocks, retrieving it after a few seconds. Luckily it was fine. I finished with my water and looked to find the trail once more, but I couldn't. For twenty minutes I stormed around in circles, loudly swearing my brains out, until I found where the trail continued. Trying to make up for lost time, I hurried along it, tripping over every available projection. I made it up and over a small climb and by the time I made it into the hot, humid valley, it was almost noon. I discovered that I had lost the cap off one water bottle and the other bottle entirely, so it was a good thing I wanted to go to town anyways. I made myself look "presentable" and soon had a ride in the back of a pickup headed towards Rutland. 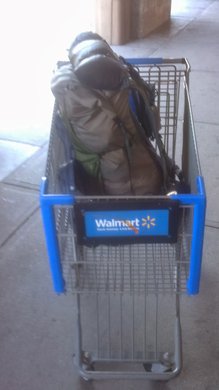 The driver of the pickup was a day hiker whose sister was visiting from California. Extraneous information? Maybe. He drove me all the way in to Rutland. Meanwhile, a car full of pretty girls pulled up next to us on the highway to take a picture of the funny hobo in the back of a truck. At least I say they were pretty, but I have been hiking for a while now. I smiled and waved, and my chauffeur continued on to Burger King, where he and his sister joined me for a gourmet lunch. She seemed less thrilled with the idea than he was. When asked the fateful question, she looked at her brother and did the old "toooo gooooooo?" but he insisted that their order was for here. So it came to be that we ate and talked about the hike. He liked my American flag bandana that I had tied to my pack strap. I explained that it normally was on my head, but I wanted to look presentable when getting a hitch. "I got news for you, Rooster," he joked. Then he further drove me to Wal Mart, where we said our thank-yous and good-byes. I walked around the store continuing my trail habit of talking to myself, my pack sitting in the cart like a small child. I visited the library for WiFi and to research how exactly to get back to the trail, since the hitch out wouldn't be easy. I decided to take a 50 cent bus to taco bell, which was at least in the right direction, and to figure things out from there. 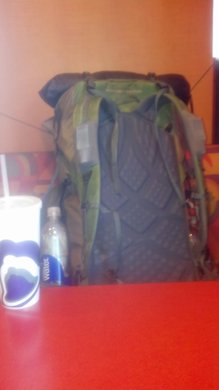 I happily marched into Taco Bell and got pretty creative with my order. I also told the girl behind the counter how excited I was to come to a Taco Bell after 500 miles on the trail, and she didn't really know how she was supposed to react to that. I set up shop in a booth and called a taxi company, getting a quote of 13 dollars, which I deemed too expensive and said I would take another bus that wouldn't come until 6:30. With time to kill, I walked across the highway to a pretty depressing mall and then down the street to Denny's. I charged my phone and ate breakfast food until I realized that I had had just too much town food for one day. Back across the street to the bus stop and I was on my way to the trail! At the trailhead parking lot, an older couple got out of an RV and offered me a soda. I indulged even though I knew I was overstuffed. Turns out the guy has been hiking northbound, meeting up with his wife every three days or so. I was jealous of his setup. And not only that, but they had kayaked from Key West to Tallahassee, then he walked to the trail in Georgia. After he summits Katahdin, he's going to keep hiking to Nova Scotia to see family. That's a pretty long trip, I think. It's days like this, where I end up all over the place, figuring things out as I go, that I truly realize I'm on an adventure. It hits me all of a sudden that I'm in Vermont. Well that's about enough out of me for today. 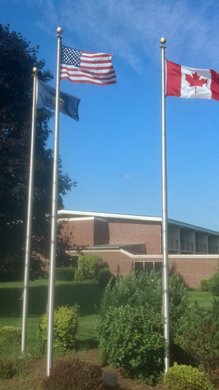