It seems to be the norm that I come up with a plan, only to scrap it based on how I'm feeling. That's the way of the Appalachian Trail, though! I crowed this morning around 5 and was rolling by 6. Unfortunately, the first mile I did wasn't one that counted, as I had to walk back up the side trail. There was a light rain, so I put my rain jacket on. I only really wear it when it's cold out, otherwise I sweat it out when I climb. I made the short (sadly, sweaty) climb up South Twin Mountain, lucking out and having some good views among the clouds. I arrived at Galehead Hut right after the guests had finished breakfast, with my plan to do a work-for-oatmeal unfolding perfectly. I found two nobos who had stayed the night, and I asked the Croo if I could eat breakfast if I did some work. They immediately warmed to the idea and handed me a plate, which I filled with pancakes and oatmeal then drizzled with syrup. My work was pretty easy: changing out ten pillowcases. Oh yeah!! It had started to rain harder, and I began to rethink my plan of pitching my tent on a platform at the end of the day considering my utter failure last night. After chatting with Ned, one of the nobos, I decided to push the extra miles into town, then take a zero tomorrow. 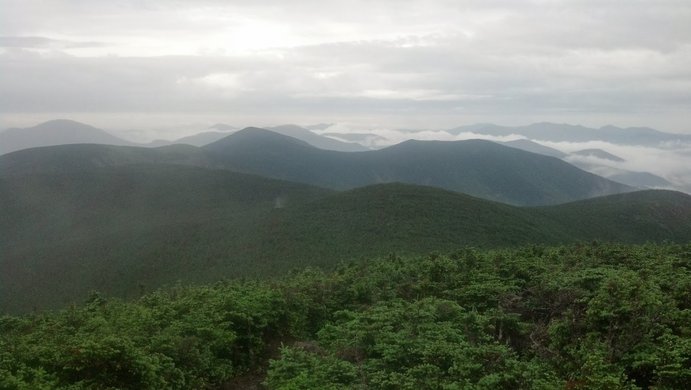 I bid my nobos farewell and took off into the rain, this time with no rain jacket. I dipped into a notch then made a steep hike up and down Mount Garfield without much difficulty, then ate a snickers and made my way up Mount Lafayette, a sizeable peak at 5291'. I was faked out by the fog and several false summits, but eventually I made it. I walked for a few miles above treeline through the fog, running into a few nobos on the way. I told one about my plans for Lincoln. He had just come from town, and he told me I should go to Chet's Place, a quasi-secret AT hiker hostel. Many nobos had told me the same thing. He also told me that Man of Steel was no longer playing in the theater. I curled up into a ball on the ridge and my spirit left my body as the cold winds robbed me of my last breath, ending my thru-hike. Not really, but I was a little sad. I hiked down into Franconia Notch, making the steep descent carefully in an attempt to save my knees. After stepping over a divider as I daydreamed and losing the trail for twenty minutes, I relocated the trail and hiked the mile side trail (they aren't paying me for this!!) to US 3.

I caught two one-mile hitches before getting in a truck with Todd and Gina, who knew about Chet's Place and dropped me off at his front door. Yeah small towns! I knocked on the door and Chet rose from his wheelchair, answering the door. "Where you coming from?" he asked.
I turned my head inquisitively and answered, "Katahdin."
"Where you going?"
"Springer."
"What mountain did you just come down?"
"Is Franconia Ridge a mountain? And before that it was Lafayette and Lincoln."
"What's your trail name?"
"Rooster."
"Rooster, you have answered my questions correctly."

The place is in a garage off of Chet's house with mattresses on the floor and bunks in the next room. Signatures from hikers over the years adorn the walls and every wooden surface. Chet does this out of love, and will accept work-for-stay or whatever donation one is willing to throw down. In short, it's a pretty cool place, and three sobos are here: Dave the Pirate, Smiles, and Eric! A Shangri-La indeed. I now sit showered, laundered, and wearing socks with Crocs, the ultimate in comfort. I am going to rest up for a day before conquering the last two alpine zones of the trail. My first zero! I thought it would be prudent, and I won't really lose any progress compared to my previous plan. Now to see what the town of Lincoln has to offer and to share stories with my fellow sobos.