Today started exactly half an hour late because I had plans to arrive at the West Hartford general store at exactly 8 AM for opening. I strolled the easy four miles to the convenience store and sat on the steps for the few minutes before it opened. I was joined in this excitement by Miler, a northbound section hiker. Miler is one of the lucky people who was born with a trail name...Miler is his actual name. He was a chatty fellow so that made my end of the conversation easy, something I enjoy in the morning before I'm totally awake. When the doors opened, I promptly forgot about picking up my mail drop and went straight for the breakfast menu. Miler and I ate and drank coffee in abundance before I realized I needed to resupply there too. I grabbed the typical stuff: instant dinners, pop tarts, clif bars, candy bars, and insect repellant (not for my consumption). I also opened my mail drop and revealed two shiny new shoes! They're the same exact kind as my last pair, just not destroyed by the rugged northern terrain. I bid my old kicks a quick goodbye and tossed them in the trash. Somehow I had lost almost two hours at this small-town convenience store...woops. 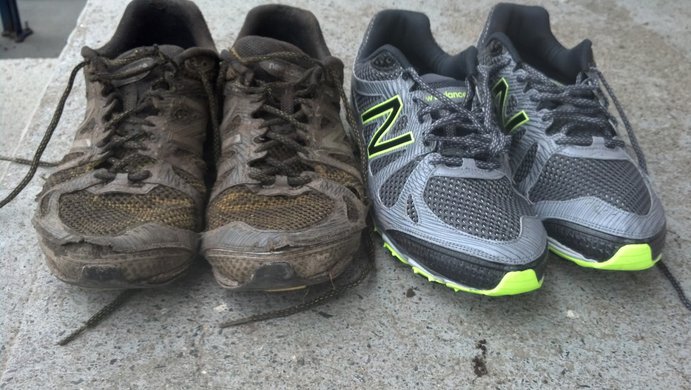 I continued walking on the road until a white blaze marked the trail's disappearance back into the woods. I met a steep climb, countering it with a sky-high blood sugar level. I sweated my way up the switchbacks (yes, Vermont has switchbacks!) and looked ahead at the day's elevation profile. A lot of little ups and downs. I always wish someone could just stack the ups on top of each other to make a mountain, but I think that job is harder than I make it out to be. Anyways, my day was mostly a battle to make good time over these little undulations through Vermont's world-famous mud. My new shoes had a rough first day. I quickly sank in up to mid-shin level. "Welcome to the world," I said sadly to my two dirty friends. 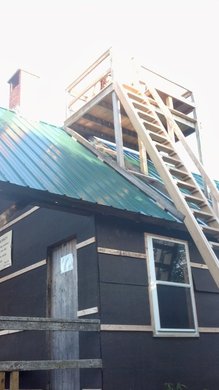 Around midday, I chatted with a couple of nobos who brought rave reviews about a private cabin on top of a hill. Apparently, there was a lookout tower on top, and you could sleep in the cabin as a thru-hiker. Not wanting to miss the opportunity to see a Vermont sunrise, I mentally extended my day by 2.6 miles. More of the same tiresome terrain brought me to Wintturi shelter. Since there was no water source by the Lookout, I went to fill up my water bottles at the stream. What I found was a naked man. Unfazed, I apologized for my intrusion into his bath time but nonetheless went upstream to get water. The man was Hardhead, another southbounder like myself. He had been having a rough time since leaving the Whites, which is an odd thing to say. He even found himself on the verge of quitting, walking five miles down the road before going to sleep and thinking better of it the next morning. He just isn't having any fun! I gave him encouragement but ultimately had to push on to the Lookout, leaving the shelter of bad juju behind. The remaining few miles weren't particularly hard, but my body was tired from the rolling hills. I saw the sign for the Lookout and rejoiced. It was even better than I expected, with screens over its windows and everything. No bugs inside with me tonight!! I climbed to the lookout tower on the roof and ate dinner with two sobos from Florida. They'll be hiking until they have to start paying off their student loans, thus becoming real people. But for now we're in lala land, playing house in someone's private cabin, graciously lent.