Don't ever let anyone tell you that you can't have it all. I started hiking this morning, saying bye to my to Long Trail friends. I got to another mountain with another observation tower whose name I forget. The hike down to the next shelter was pretty uneventful and fast. I got there around 10:30, having completed over 12 miles. I talked to a couple of early Long Trail northbounders who thought about where I had come from this morning. "Wow, you really are a [redacted] rooster!" Caveman said. I then decided that I deserved a treat and that I should go into Bennington for lunch. I just knew that I could still make it to my goal if I just focused and didn't get distracted in town. I got to a good spot and got a hitch quickly. My driver didn't know that the AT existed, which really made me surprised that he stopped. It gives me a kick when I get a ride from someone who doesn't know I'm just going a few miles. With the idea of fresh(-ish) green vegetables in my mind, I rolled up to Subway and went to town. I got a little too full and needed a break before starting my hike again, so I went to the library for a few minutes and burped and used the computer. 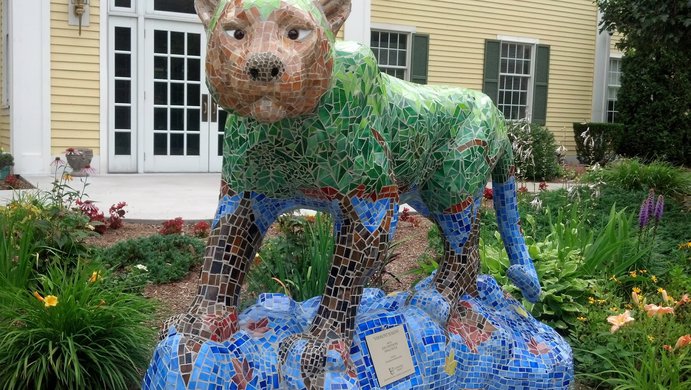 Another town visit successfully behind me, I walked to the edge of town and stuck my thumb out. Everyone in town must have thought I was giving them a thumbs up, because I had trouble hailing a car. A couple on the sidewalk asked me how far I was going. I told them Georgia, and they were flabbergasted. How do people in trail towns not notice all these dirty hikers? I was happy to explain my journey to them. The woman showed me the upcoming weather on her phone, telling me to be careful in the heat. She offered to buy me food and then said she'd be happy to take me back to the trail. On the way, she told me about how her house was haunted by a 5-year-old girl who caught on fire. She said it was a good thing though, because she could play with her daughter's toys. We got to the trailhead, and she got out of the car to take a look for herself. She looked really intrigued, asking where the trail went and saying it looked really nice. I hoped that someday she would take a drive down the road and go for a hike herself. She gave me packages of mini chips ahoy and oreos. She even gave me 5 bucks to help me along. I tried to refuse, but she set it on the ground. I'm coming to find that it is the people who have the least who give the most. I'm more optimistic that a beater of a car will pick me up. A BMW, an Audi? Forget about it. '96 Honda Civic? Most likely. 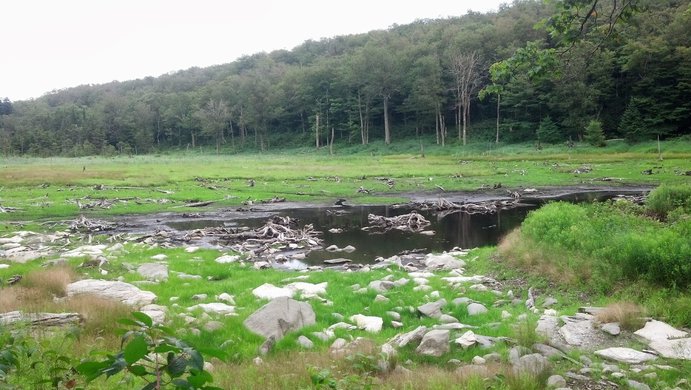 I hiked up the steep (by Vermont standards) incline from the road, bumping in to nobos as I went. One gave me a tip to stay at a specific campsite in Virginia. I tried to tuck it away in some safe place in my brain. I came through a big group of nobos, about six at once. I asked them where they were relative to "the bubble", the big swell of northbounders. One of them piped up, "We're probably in the first 50 or 75 nobos you've seen." I couldn't contain my reaction. My head was shaking before he had finished his sentence. That was just absolutely so wrong. I've been seeing nobos since Monson, ten days into my hike, and I've been seeing over ten a day since the Whites. I sadly informed him he was closer to 200. He was sure that people were cheating or doing something sketchy. I kept on moving, getting to the next shelter, where a sobo LT'er sat. He told me my two sobo friends had decided to push on and finish up their hike tonight. I got a little sad but then I made some Gatorade and my mood improved. I decided I would still push on the the remaining 7.5 to the shelter. It threatened to rain the whole time and I really believed it would pour as I pulled in to camp. It never really came to anything, though. I am joined tonight by 5 million nobos (all good-natured), Pink Leprechaun (a sobo like myself), and a sobo section hiker. The atmosphere here is very festive and, most importantly, positive. The section hiker, whose name I have of course forgotten, and I have plans to stop at Friendly's in North Adams tomorrow. I love breakfast food and company. Boo-yah.

Everyone talks about their reasons for hiking the trail, and they are typically hard to define. I always wished I could put mine into words, and today I think I had a realization. I don't want to jump the gun and say anything before I've had time for my thoughts to crystallize. I'm mostly writing this here to remember this day. I think with this in mind, I'll have an easier time on those tough days. But today was a good day. I got my big miles in, and I got into town. Yeeehaww the Rooster flies again!