Chocolate chip pancakes are not mountain climbing fuel. I gave my sobo section hiker a 30 minute head start to the Friendly's in North Adams, then I started off myself. I got to the Massachusetts border in about an hour, celebrating with a few pictures and my theme song. Boy did I have a morning face on. The forest immediately changed character. I don't know how to explain it, but Massachusetts was clearly different from Vermont. My first steps in the new state were down a rock slide. As I carefully picked my way through the jumble, I heard thundering steps from behind me. I turned to see Pink Leprechaun powering down the slope confidently and without trekking poles. I was as dumbfounded as the day I saw the moose. He disappeared ahead of me as I subconsciously tried to quicken my pace. Pink Leprechaun was waiting at the road crossing that led to North Adams, so we walked to Friendly's together. When we got there, the section hiker had already ordered food and we quickly did the same. I got a stack of 3 chocolate chip pancakes. These came with a side of meat, which I subbed for another chocolate chip pancake. The section hiker, who is a pastor, blessed the food and we ate. After breakfast, we went to Price Chopper, and I got a couple pieces of fruit and ate them outside. 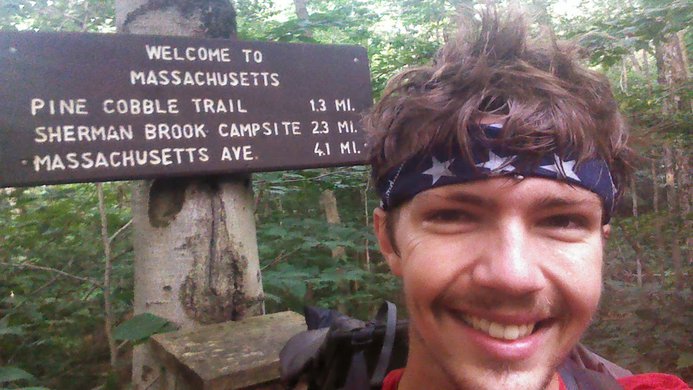 The flat road out of town was even a struggle. Once I got to the trail and it turned upwards, I began to need to take breaks, being as full as I was. I would sit on a log with my head in my hands, then continue walking for a while. After a few cycles of this, I walked off the trail and was sick, which made me feel a little better. Unfortunately, immediately following this slight relief was a climb up Greylock, the highest peak in Massachusetts. I took plenty of breaks, then stopped at a shelter for about 45 minutes to get water and sit around feeling miserable. A Dutch tourist appeared, looking for a waterfall. I couldn't help him, and his shaved arms, legs, and armpits were threatening to make me sick again, so I headed out. I felt stronger for a while, until all of a sudden I felt shaky and weak. The trail became hard to focus on, and I sat down on a protruding root. I passed a summit but didn't care to look. Finally, about 2 miles from the summit of Greylock, I sat on a log, removed my pack, and began making plans to get back to North Adams for the night to recover. I began shopping hotels, getting sort of excited to sleep in a bed and watch TV. This is something worse than over-eating, I thought to myself. I noticed North Adams had a medical center, and I planned to stop by the following day. I turned my phone on, getting full coverage from up high. It just so happened that a few college buddies were starting a Google hangout, so I joined in from on top of a ridge. It was pretty weird to be so technologically attached, but it was nice to see everyone's faces. After an hour, I signed off and was ready to get off the mountain, but I felt miraculously better. 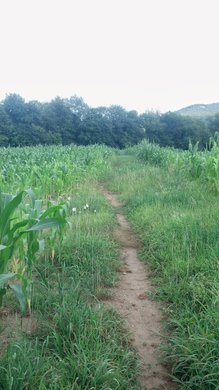 Long story short, I had just eaten too much of that sugary goodness. My body had basically gone into shock, I think. Feeling good again, I flew up and over Greylock and down into Cheshire, cruising along the smooth, well-graded trail. The town looked small and inviting. I knocked on the door of the church hostel and, getting no answer, naturally went to the pub for some pasta and a beer. Not having eaten since 10 AM, it felt good to see food again. I tried one last time at the church hostel, and this time a pastor answered. He set me up in the auditorium with Pink Leprechaun and some section hiker whose name I didn't catch. Too tired to journal or chat, I quickly got ready for bed and jotted down a few notes about the day, to be transcribed later (by me in a coffee shop in Dalton). 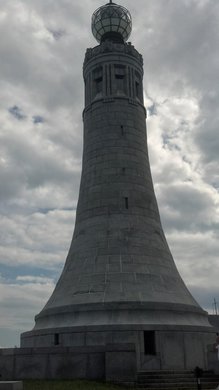 Tower on top of Greylock