New York doesn't just let you have miles. I looked at the elevation profile last night and thought it would be an easy day. I was utterly mistaken. Maybe I should take that back. There are miles to instill hope, followed by those that rip it away. I believe Bane from The Dark Knight Rises said something about despair being impossible without hope. I was awoken by a train's horn blowing, since I slept right through my alarm. I had a nice walk down into the Hudson River Valley. The fog from last night's rain was burning off, and it made for some good views of sun mixed with mist. I started a road walk, then came around a corner to behold Bear Mountain Bridge. Being a structural-engineer-in-waiting, my mouth dropped open and I was filled with glee. It's a beautiful suspension bridge that the AT is lucky to traverse on its way to Bear Mountain State Park. 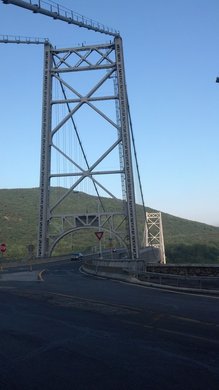 The Bear Mountain Zoo, which the AT also goes right through, was closed at this hour. I sadly took the bypass around the walls. In doing so, I not only missed seeing the animals, but I missed the bear cage. At 124 feet, it is the lowest point on the trail. There is some joke to be made here, but the wording just isn't coming to me. I crossed through a tunnel to Bear Mountain State Park, which is actually a bunch of vending machines and picnic tables surrounding a lake. I took advantage of the ice cream machine (two times), and started my ascent of Bear Mountain. Maintained by the park and popular among day hikers, this mountain has a true cakewalk of a climb. I neglected to use my trekking poles because the rise was so shallow and there was a sidewalk. On top I found a closed observatory tower and more vending machines, after which I followed an equally smooth trail back down. Despite the very touristy feel, Bear Mountain State Park and the entire Hudson River Valley made for a beautiful morning. 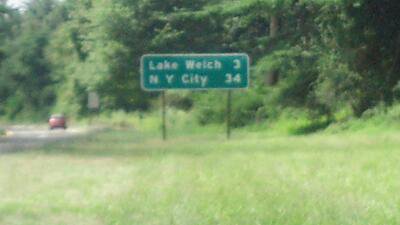 The terrain started to do some ups and downs, but nothing I wasn't accustomed to. I walked through a quiet forest with red and yellow leaves coating the ground. I crossed the Palisades Parkway, which takes cars the short 34 miles into New York City. I looked ahead on my elevation profile and noticed the ground leveled out ahead. Time to cruise, I thought. It was just a series of 25 foot gains followed by 25 foot losses over rocky ridges. With my plan to make big miles today and tomorrow in order to have a hostel stay in jeopardy, I started to get really frustrated. I stopped at Tiorati Circle for a water refill and a break, then hopped back in the saddle. To be fair, the feeling of walking through a quasi-open space along the ridge was great. I just wasn't going anywhere. My mood was boosted as I reached a famous AT attraction: the Lemon Squeezer. It's really just two vertical rocks that are really close together, making it a tight squeeze, but I managed. 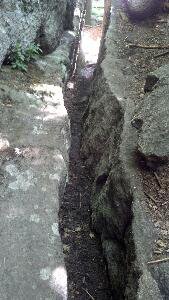 The end of my day was a similar struggle to make headway, but I still got my haul. That's why I wake up early! No matter what the trail throws at me, I will have time to make miles. My body expressed a little disinterest in continuing, but my mind told it to shut up for a minute. I pitched my tent up here on Buchanan, hoping to keep the mosquitoes away with a breeze, but alas, here they are to help me cook dinner. Still a solid day, and New York really isn't as bad as all these nobos want you to think. 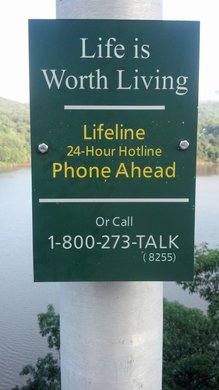 Sign on the bridge, with which I would have to agree 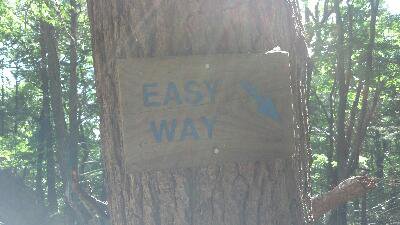 I did NOT take the easy way down that rock wall