Well New Jersey went out with a whimper. The cutest puppy whimper you ever heard, though. My hike this morning from Mohican Outdoor Center down to the Delaware River had to be one of the smoothest experiences of the whole trail. There were a few rocks to contend with at first, but after that, the trail was beautifully maintained like a gravel bike path. I got down to the Delaware, the dividing line between New Jersey and Pennsylvania, and began an extensive road walk. I went under the overpass for I-80, doubled back, then followed a ramp up to a pedestrian footpath right along the interstate. All that separated me from oncoming traffic was a 3-foot-tall concrete divider. That was good enough for me, and I might even go so far as to call my hike over an interstate bridge soothing. Interstate 80 is very close to my heart. It used to carry me to Cedar Point (America's Roller Coast), and more recently it passed about a mile from my apartment in Oakland, California. This interstate had done me well, so I wasn't worried it would betray me. There was no "Welcome to Pennsylvania" sign visible, so I took a picture of the next best thing (see below). In the town of Delaware Water Gap, I stopped at a market that served breakfast sandwiches. As I walked in, I saw that they also made every type of baked good imaginable. I stopped myself from buying an apple pie. I sat down and talked to a few March-start northbounders. They reassured me that the rocks weren't that bad ahead. I admired the air of peace they carried with them, even though I wasn't sure how they would get to Katahdin in time. I also met Chipmunk, who, at 15, is attempting to become the youngest solo thru-hiker. She still gets to sleep in her mom's camper every night, which I think is a pretty nice deal. 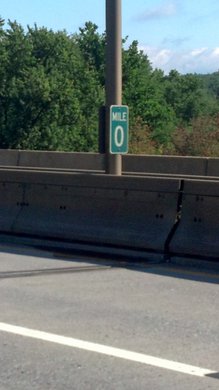 I got back on the trail with plenty of questions about the Pennsylvania rocks still swimming in my head. A quick climb out of the gap brought me to an incredibly flat ridge. I had a walk along a manicured access trail for a while, but then the trail went back into the real woods. It was similar to southern New Jersey, with little rocks that required concentration to avoid. I stopped at Kirkridge Shelter for some water. There was a hiker sitting at the table when I walked up. I introduced myself and asked if he was a thru-hiker. He responded yes, and that he had already done 18 miles. This was around 1:30 PM and he was an older guy, so my BS alert signal began to flash. I didn't really care though. He told me he had an online AT coach who gave him plans and monitored his progress. He also mentioned skipping 71 miles of Georgia.
"Isn't that almost the whole state?" I asked.
"No, it's more like 300 miles..." his voice trailed off. I don't know the exact distance, but Georgia definitely isn't that long. He gave me more warnings about rocks ahead, but I was already on my way. I don't judge people for not being thru-hikers, so I don't know why he tried to falsely build himself up.

Up ahead, the rocks were, in fact, annoying. They never felt treacherous, but they were a nuisance. Every step had to be planned out. It made for sore feet and a sore mind. I had to function on the lowest level: simply walking. Any daydreaming and I would stumble over a protruding rock. I wanted so badly to just zone out like usual, but I wasn't able. Time ticked by very slowly. I made good time, but I counted every step. I descended a little into Wind Gap, my destination for the night, and made my way to the Beer Stein, a dive bar that lets hikers tent out back. I met up with two nobos who started in May. With their faster pace, I found that we were very like-minded. We went to a Sports Bar where we got to see the Braves play for a bit, then we got pints of ice cream at the TWENTY FOUR HOUR gas station across the street. I'll definitely be getting something there in the morning. Oh YEAH! 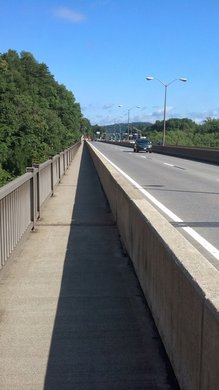