Today was about as uneventful as they come, but it was an enjoyable one nonetheless. I waved goodbye to Squints' motionless tent (he got in last night after I got done journaling) and headed on my way. The forecast was for all-day rain, but I didn't really mind the thought. It hasn't rained very much at all the past few weeks, and I am about to enter one of the driest states in Pennsylvania. Not to mention my destination had an indoor sitting area for guests to hang out, even those who are just tenting. That's a lot better than laying in my tent to stay dry, which is quaint in its own way. The rain started before I had made too many miles, but it was slow at first. I hesitated to put on my pack cover, but finally did. A similar debate ensued over my rain jacket. Last night, as usual, I had checked up on the "attractions" for today. What I had in store was a restaurant called. "Joe to Go", which sounded like a pretty alright place to have breakfast. Around 10, the trail crossed a road within 100 feet of the establishment, subjecting me to the trail law that I would have to go in and get something to eat. I got a breakfast sandwich, coffee, and orange juice. Not too bad in my book. Sitting outside, I met a mother-son thru-hiking duo. They had started late from Georgia: May 8. They want to be done by September 15, which I deemed ambitious but doable. Another couple of nobos arrived, this pair having started in March. They were not in such high spirits, a common affliction among these back-of-the-packers. I followed up breakfast with a cheese sandwich, rounding out my morning and fueling me for the remaining 17.6 to the Mohican Outdoor Center.

The rain intensified a bit, making me glad I had on my rain jacket. It was on the chilly side, so hiking in just my T-shirt wouldn't have been as much fun as on those hotter days. The rain is an interesting phenomenon. It kind of turns you into one of those older, grisly hikers. You lose a little bit of speed, but you gain an iron resolve and laser-like focus. I just put my head down and hiked. I bumped into a northbounder who was curious how close he was to various shelters and other landmarks. I realized I couldn't help him at all; I had stormed right past everything without noticing. Walking up a hill, a couple of nobos greeted me. Not expecting to see people, I let out a loud "OH!" The rain let up, but the fog remained. It gave everything a mystical feeling, especially the deer I saw with her fawn. They didn't mind me at all, although the mom's head tracked my progress the entire time I hiked by. I kept trucking on the flat-but-rocky terrain, zoning out and writing this blog in my head. Soon enough, I got to the road crossing for the Mohican Outdoor Center. It was only 4:30! I was so happy to get time to enjoy sitting indoors before I had to go to bed. I checked in, set up my tent nearby, then came back to the main building for some R&R. It really was a good, peaceful day on the trail. 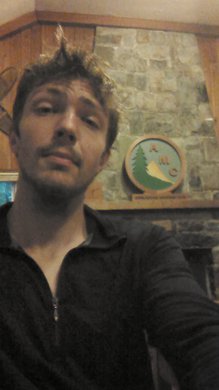 Since I didn't have a ton to write about today, I thought I would switch gears and start on a little side venture that I've been thinking about. Since I announced I would be hiking the AT, I've been asked on many occasions what made me want to do it. Any thru-hiker will tell you that that is a really tough question to answer concisely. So instead, I thought I would tell a few stories from when I was younger that seem to have gotten me here today. As I've been walking, I've begun to understand that "Rooster" is a side of myself that has existed for a long time; he just recently got a name on this adventure. So any time I have a short writing day like today, you'll be treated to a childhood Rooster anecdote. Keep your eyes peeled!