Last night, I was once again drawn in by the allure of TV. I was watching some show that I would never watch at home, something like Law and Order. But it was what was on, and I'll be darned if I wasn't in a recliner with a view. I didn't get to bed until after 11, but I was still awake by 6. I didn't feel tired, so I just went with it. During my grocery store free-for-all yesterday, I bought a box of cereal and a half gallon of soy milk. I kept combining the two in my cookpot until I ran out of cereal, then I put the rest of the soy milk back in the hiker fridge. I drained the rest of my 2-liter soda bottle. How is that for breakfast? Squints and I got a hitch back to the trail without even trying. A painting truck saw us walking and beeped at us, so we got in. For the first little bit, Squints and I walked over a boardwalk section, talking as we went. Then all of a sudden, I didn't hear him behind me. He had stopped to take pictures, so I hiked on. Hikers typically don't hike right after each other. Groups can be spread out by an hour or more. Nonetheless, we had different destinations today, so it was hard to say how much we'd be seeing of each other. The terrain in Jersey continues to be extremely gentle. I walked through farmland, over marshes on boardwalks, and up and over a small climb. The hiking flattened out further through a wildlife sanctuary and then on a road walk. I like this type of section for a little bit at a time. In moderation, it lets your mind wander, but in excess, it gets boring and weird hip muscles get sore from walking so quickly. 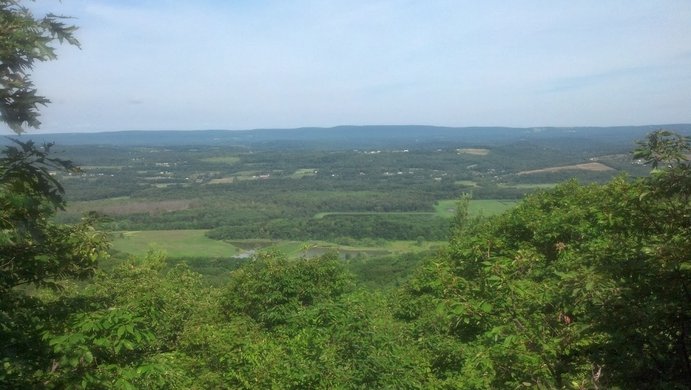 I thought it would be nice to take a break from the monotony and head into Unionville to a pizza place that a few nobos recommended. What they claimed was only 0.3 off the trail was more like 0.7, but all is forgiven. After ordering, I sat inside staring blankly at the news channel on TV. My mind drifted to the mail drop I had to pick up at High Point State Park today by 4 PM. I started doing the math in my head, coming to the conclusion that if I left in the next ten minutes and hiked near my maximum speed, I'd still be cutting it close. What was I doing at this pizza place? I wolfed down my food and quickly paid, hoofing it back to the trail. I did just what I set out to do, flying down the path as quickly as I could, using my trekking poles to push off and go even faster. Luckily, I got to the park headquarters with time to spare. I was also treated to a surprise: a free soda just for going inside! I didn't even ask why they offered; I just drank it. Outside, I talked to Nobos Number 23, 24, and 25 for the day before departing for the shelter. Water is scarce at times in New Jersey and beyond, so the caretaker for this shelter brings up city water periodically. It's sitting in the box where we put our food, making life a lot easier. I love when I don't have to purify my water!

Tomorrow will be my last full day in New Jersey. Well, today was only my first, but whatever. Beyond lies Pennsylvania, the state I have dreaded for months. As I approach it, every nobo warns me how awful the rocks are. That means that, on average, I hear 30 stories about these PA rock fields every day. Apparently, there isn't even any soil visible, just rocks to walk on. They range in size from softballs to basketballs to boulders, and it sounds like they make life miserable. At the same time, one could say that listening to hundreds of stories about a miserable place is also miserable in itself. So I think I'll just go ahead and walk through the state, because that's the same thing I did with the other six and a half states.