Another day of waking up to a stiff shin. I walked to the bathroom and sighed, readying myself for another day of annoying walking. I was a little peeved to begin with, because the campsite had been just a grassy area that resembled all the other ones I had seen that day. Why this one was the official backpacker campsite I will never know. Perhaps they chose it for its close proximity to the railroad tracks. I unwittingly learned the train schedule as they rolled 50 feet away from me during the night. I would wake with a jolt and sit upright, then go back to sleep. It didn't really affect my sleep though. Today I was motivated to get to Pine Grove Furnace State Park. In addition to the half-gallon challenge, it is home to a 20-dollar hostel. A bunk, a shower, internet, a computer, and breakfast were all included. This also would make it possible to complete the ice cream challenge without hiking another step afterward. I always take perfect opportunities like this as a cosmic sign. I finally walked out of the cornfields and climbed Center Point Knob, the original midpoint of the Appalachian Trail. A little farther, I came upon Alec Kennedy Shelter, but it was two tenths of a mile off the trail, so I skipped it. Someone was walking out, so I stopped to talk. It was Pink Leprechaun, who I hadn't seen since Dalton, Massachusetts! He skipped ahead after visiting New York with his sister. I didn't recognize him at first; his previously-greasy hair had been braided back into corn rows. What gave him away was his trademark tiger shirt. We caught up, but then he flew down the trail. He's another one of the fast hikers.

I took a detour off the trail to stop at the Green Mountain Store for a snack. I saw Pink Lep coming back, and he handed me an extra can of Mountain Dew. Awww yeah. I got a tasty egg sandwich, but tried to keep my stomach partially empty for the upcoming challenge. I decided to try out the headphones again, this time with the album Discovery by Daft Punk. I started listening before I got off the road, dancing as cars went by but not caring a bit. I must have subconsciously been reminded of my long-lost roommate Sebastien, who loves Daft Punk. I busted out one of his signature dance moves, a single, violently swinging fist held out on a bent arm from the waist. That doesn't describe it well, but hopefully Seb will understand what I'm talking about. Daft Punk, Passion Pit, and Tune-Yards carried me towards the state park. In the last bit, I came down a hill and entered the park. I didn't realize it was a Saturday, but I was pleasantly surprised. Guests were hiking and picnicking everywhere. It felt like everyone was having a good day, and it was infectious.

Aaand I accidentally deleted everything after this. Here is what I recall the day after: I stopped in to the Appalachian Trail Museum, which was actually really cool. It had a lot of artifacts from the AT's early years, like one of the first shelters and the wheel that Myron Avery used to measure the trail's distance as he hiked it in sections. I looked around for a while, but soon I got anxious to start eating my ice cream. I walked over to the general store, where I was happy to find Sole and Pink still relaxing after finishing their challenges. I didn't waste time, buying large and small containers of Hershey's Mint Chocolate Chip. Little-known fact: the "large" size is actually 3/8-gallon, not a true half, thus the auxilliary pint. I left them out in the sun to soften up for a bit. The clerk at the store had already given me my trophy, a small wooden spoon. I hadn't earned it yet, so I gave it to Sole to hold on to. I told him to destroy it if I failed. I started in to the ice cream, beginning with the big container. That one started to taste funky after a while, so I went for the pint. That tasted just right. There must be some difference to how they process the large and small sizes; the chips in the large size were much larger and spread out. After hopping back and forth between the two containers for a while, I drank the remaining goo and scraped both of them clean. I am a proud member of the half-gallon club! I really didn't feel bad, but at the end I had the feeling that I didn't want quite that much ice cream. That's a foreign feeling to me on the trail. 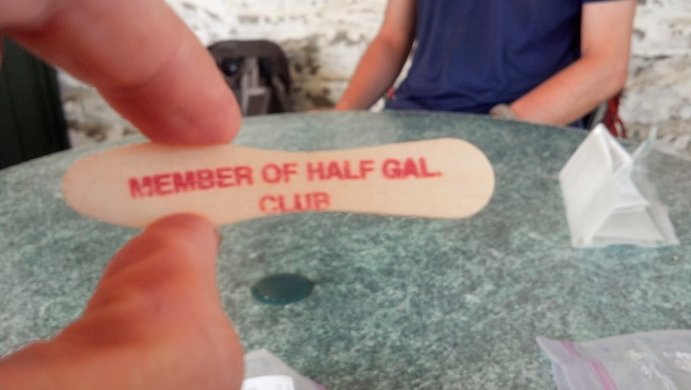 Since I OD'ed on lactose, my plan for the day had been to stay at the adjacent hostel. I took off my shoes and switched into my Crocs, waiting for it to open. A section hiker had the same plans, but told me the hostel was closed for the night due to a wedding. I was in my Crocs though! That is the official end of the day! No one understood the rules. Pink and Sole had already hiked up to the next shelter, so I did it alone. I glared at the delightfully tasteful wedding reception as I passed. Are you allowed to boo a wedding? The hike up was really easy though, and I got the bonus of passing the halfway marker! It changes every year, but this marker was constructed and set in place last spring. It's slightly off, but that was close enough for me to stop and film a video. I really hadn't planned on it until that moment. I'm sure someday I will be embarrassed, but that day is not today.

Sole was suprised to see me at the shelter, since I wanted to limit my mileage today. "Rooster!" he called out. "Ah oh ah oh AH!" I responded. That is a transcription of a rooster call, by the way. I have avoided doing it around people up until this point, but I decided being loud was called for on this special occasion. We were joined by the most talkative section hiker of all time. He talks endlessly and without provocation. He could talk to a corpse. No one is responding to him, yet he is telling us the story of riding horses in New Mexico. The good news: a couple of weekenders gave us s'more supplies. Alright, today was a good day. 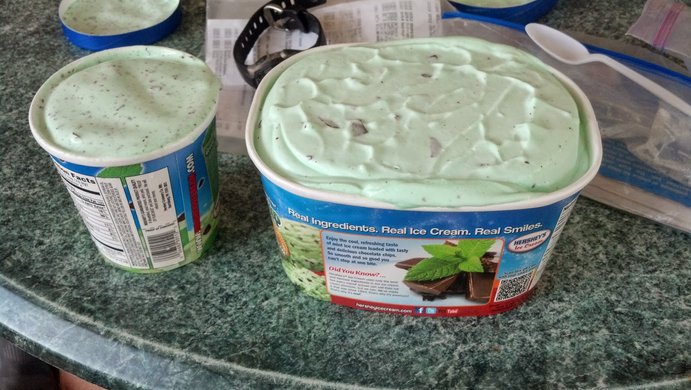 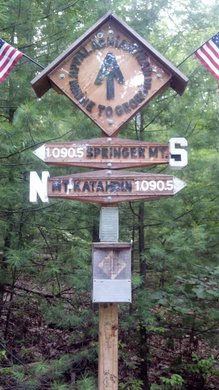