Oh what a difference it makes to take shorter days. After my section hiker buddy talked to me for 15 minutes last night as I played possum, I decided to award myself extra time to sleep in. This was made possible because I constrained myself to 19 miles today. Because my injury is no longer affecting my hiking pace, shorter distances give me more time to relax and do whatever I want. I turned off my alarm and woke naturally at 6:30. Soon after, Sole came to say goodbye. He had a long day planned, so I wouldn't see him again for a while. I decided I had better hurry up and get ready before my shelter-mate woke up and started talking. I was almost ready to go when he began stirring. He immediately continued his monologue from last night, talking about how strenuous his five-mile hike had been.
"The trail ahead for you is nothin' but rocks. I'm sure I sweated five gallons on the way up here."
"That would be about forty pounds."
"Yeah I know, I must be getting sick. Yeah the trail here is no good. The stuff in Virginia is like that over there." I could see out of the corner of my eye that he was gesturing, but I didn't feel like feeding the flames. "Yeah like that. Virginia's trail is more like that stuff." I gave in and looked. It went on like that until I hurriedly left. 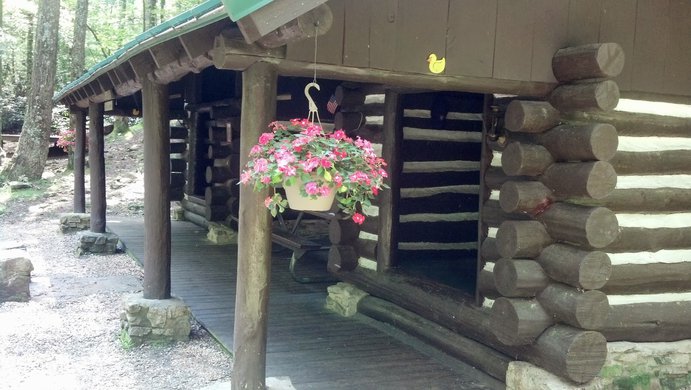 Six miles in, I stopped at another nice southern Pennsylvania shelter with Pink Leprechaun. This one was situated in a grassy clearing near a stream. It was immaculate, with bunks for its occupants. I finished writing my journal entry from last night, then promptly deleted all of it. Argh. I signed the shelter register and headed on down the hill towards Caledonia State Park, my next planned relaxation stop. Today, my music choice was the album "My Beautiful Dark Twisted Fantasy" by Kanye West. Say what you will about Yeezy's personal life, but that is a pretty complete album. I bopped down the trail until it ended. Soon I spotted something that looked like it belonged in Better Home and Garden magazine. It was the Quarry Run Shelters. They had actually been landscaped. There were plants hanging from the structures and sitting around the entry way. Never have I seen such a quaint shelter. I signed the log to thank the "Innkeeper", as he was called, and to confirm my reigning title as the fifth southbounder of the season. This just came to light recently, but in front of me are only four people, one of whom is Matt Kirk. He is technically no longer "in front of me" because he finished his record-setting thru hike while I was staying at the Doyle. I don't plan on holding this distinction for long; I am taking a few days off after tomorrow because my mom is coming to visit! I'm not sure exactly what we'll do, but I am surely not hiking. I can fully heal my shin while riding around in a car, and I'm going to take advantage.

I stopped to chat with a family from Hong Kong as I descended the hill into Caledonia State Park. The son was so amazed with what I was doing that he asked to take a picture with me, which I was happy to do. I love feeling like a celebrity! The park itself was pretty much like I imagined: families were grilling out, the pool was full, and there was a snack bar. I had found a perfect place to chill for a few hours. One order of cheese fries and two large Pepsis later, I lay on my back on a bench underneath a tree canopy, looking ahead in my AT Guide. Virginia looks like it will be great. After tomorrow, I will have completed the second- and third-longest states in Maine and Pennsylvania, respectively. Virginia's trail length is more than the next two combined. Many hikers suffer from "Virginia Blues" as they long for a state border crossing, but I am excited for all that Virginia holds. (Almost) anything is better than PA, with its rocks and lack of views, so I am easily excited I guess.

After deleting most of my post from the halfway point, I figured I still had some stuff to say about it. I really can't believe I've made it this far with so little trouble. I credit that to a lot of help from friends. Everyone I've ever hiked with has made an impact, from giving me tips to simply leading by example. Everyone who reads my blog has also helped, whether you know it or not. I read every comment you post, and it makes me extra confident to know so many are behind me and have a stake in this hike. I'll keep trying my hardest for you all. Also, my visitors on the trail: Sami, Ben, B-rod. You guys gave me more of a boost than I would probably admit in person. It was great to see a familiar face. And to my upcoming visitors: I'll do my best to still be on the trail when you want to come!