My plan for today was to hike less than I did (remember yesterday?) but excitement got the better of me again. I got some spring water near the lean-to on the advice of Brick House, a girl staying at the adjacent lean-to. It was amazing, just like she said. It looked awful at the source, but in my bottle, it rocked my world. It was a pretty uneventful five-mile hike down to the road to Stratton. I didn't put on bug dope and I was viciously swarmed, but that's neither here nor there. I quickly got a hitch from a fly fishing guide and his pupil. I went to jump in the back of his truck but he let me sit in the cab. I was happier than a dog on a road trip. In Stratton, I restocked on food then had first lunch, which was a sandwich, a soda, and an ice cream bar. I went to the library to upload this blog, then I rolled back down the street for second lunch in the diner. It was really friendly and I talked to the workers since it was slow. Then Brick and her step-dad came in from the other room. I saw clouds rolling in so I was anxious to hitch back to the trail, but the conversation was nice (real people!!). 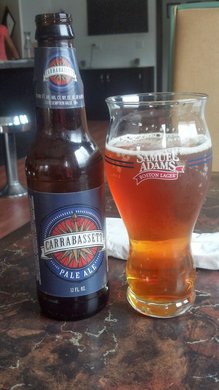 I got a ride back from a stereotypical Canadian; he was super nice and told me all about moose. The trail ahead was a sustained climb out of the gap, but I was fueled up and ready for the challenge. Thunder rumbled and I quickened my pace. Near the top of Crocker Mountain, the rain started. It got harder as I neared the top. Happy Ending, one of the Stoners with Boners crew, has a term for such situations, which I will euphemistically refer to as a "hate frick". As in, "Boy those next mountains look tough, but we're just gonna hate frick it and get over them." Anyways, I believed myself to be in a hate frick situation. I had to get over Crocker to my campsite. So I slogged along as the rain got harder, as it trickled down my neck, as it started to soak my back. Soon the trail was a stream. I hiked faster to stay warm. That's when I realized: I wasn't overheating for once! My body running hot has long been a curse. Sweating in dress clothes, soaking thin T-shirt armpits, you name it. But today this trait was my greatest asset. I cruised up over North Crocker, South Crocker, down into a notch, over the shoulder of Sugarloaf Mountain (summit trail to the side? Forget that.), and over Spaulding Mountain. I was at this lean-to, six miles farther than my goal, around 7:30, way later than I like to hike. But here I lay, next to 5 other hikers. Somewhere along the line I decided to shoot for the next lean-to, but we'll never know exactly when that happened. Also, I saw a fox yesterday. 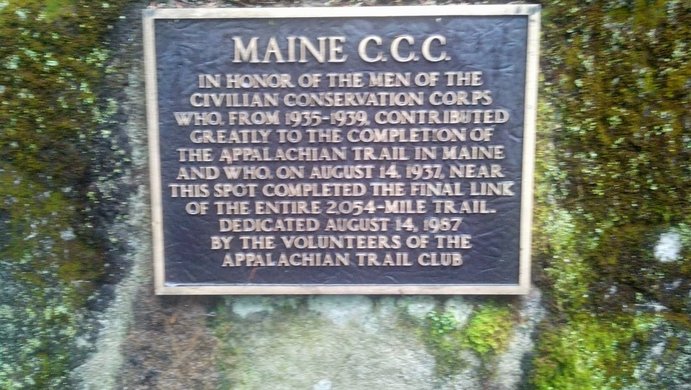 Some plaque commemorating the completion of the AT. I didn't take my phone out all day because of the rain, give me a break.