This morning, I climbed on to the roof to check out the sunrise. Unfortunately, the sun itself was obscured by clouds, but I found the colors great and the stillness soothing. I packed up and said adios to my fellow sobos, taking my time over the rolling hills. I dropped down to a brook and filled up my water bottles, a task that I've had to do more often as of late. I'm in the lowlands and it hasn't been raining, so it gets toasty during the day. My planned ending point for the day was about 19 miles from the Lookout, but I suspected with my early start, I would be able to get past that. I managed the switchbacks without too much difficulty but my legs had that sapped feeling again. It went away later in the day, luckily. Walking towards Gifford Woods State Park, I passed a parade of a family who asked me all about my hike. I love answering questions from interested people. They just can't believe I'm doing this! They also told me there was a sobo in front of me. I thanked them and turned on the jets to see who it was. It turns out there are two sobos named Smiles this year. I hope Pirate and Smiles catch up to Smiles II and a street brawl erupts. 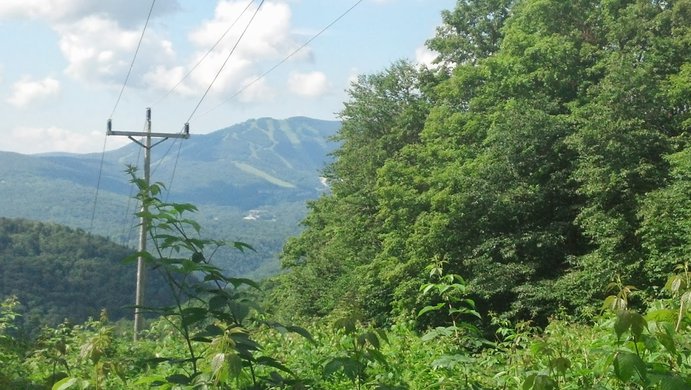 Ski slopes of Pico in the distance

During the hottest part of the day, I was feeling ridiculously lethargic. I just rode it out, taking plenty of breaks and generally sitting around. I was faced with a dilemma. Three shelters were closely spaced up the ascent to Killington. The first was close to the trail, but I would be done hiking way too early if I stopped. The second was a half mile off trail. The third would put my mileage for the day higher than I'd like, but I'd be on top of Killington for Sunrise Attempt Number Two. After conferring with a few nobos, I knew what I had to do. As I climbed and the shadows grew longer, the air cooled, making the ascent much more enjoyable. With glee, I spotted a hiker going down to get water and knew I had arrived. It's a busy location; there are eight of us inside and around five more tenters. I chatted with the shelter-dwellers, mostly short section hikers, and then I went up to cook my food with the tent people, who were almost exclusively thru-hikers. It's a nice mix and I enjoy interacting with both types. 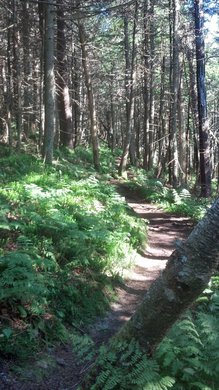 I've noticed lately that most nobos have been stopping to talk to me as we pass each other. Today I finally figured out why! On several occasions, nobos said I was one of the first southbounders that they had encountered. I'm like a roadside attraction! Not only do they want to know about the trail ahead, they want to size me up. We've finally reached the point where we're equals. For so long, I was in awe of the nobos' accomplishments. Now we can just talk like a couple of people out for a hike, which I guess is true.

Ski slopes of Pico in the distance