Well there are several "morals of the story" today. You can learn them from me! My hike began with a climb out of the gap on a gravel access road. I suspect a nearby landowner didn't like the trail going so close by, because most of the white blazes had been rubbed off the trees. I started second-guessing myself and doubled back for fifteen minutes, only to find a fresh blaze. I realized what was going on and pushed ahead, finding my way successfully. Next, I came upon a great view from The Pinnacle. I also met a couple day hikers who were posing for photos. Realizing I had arrived at the viewpoint on a side trail, I asked them which way was the AT south. The father told me to follow him. "You see, you just follow these white blazes here and you'll be down at the reservoir." I secretly rolled my eyes and followed him down the trail. "Are you sure this is south?" I asked, as the terrain started to look similar. "Yeah, this is the way we came from the reservoir, remember? We'll come up to a field then take a side trail." I decided I was heading the wrong way and doubled back, a little irritated at the hiker's wrongly-founded confidence. I saw the Pinnacle again but from a different angle. I must have been going the right direction after all! I felt bad for getting irritated then turned around again. After two miles, I got to a field that I definitely recognized. My shouting shattered the quiet morning. An old man helped me get re-oriented. "I could tell you a shortcut," he said as he leaned in, "otherwise you gotta go back the way you came." I listened regretfully and calculated that I wouldn't be cutting off any distance. What was I missing anyway, I thought to myself. Pennsylvania's trail is so forgettable that I thought I had never seen this section before. So I performed the shameful deed, getting down to the reservoir as planned. I really wish I hadn't, but I had just about had it at that point, and in hindsight I'm glad my day wasn't ruined. Moral number one: don't take advice from day hikers.

The rest of my morning hike was smooth. I experimented by blasting some music as I walked. Vampire Weekend helped me forget about my struggles for a while. Maybe I'll be doing more of it. As I approached PA 61, the road into Hamburg, I fell for the siren song of Taco Bell. Luckily, a woman at the trailhead gave me a ride in to Wal Mart. Hamburg is one of those towns right at an interstate exit, so it's all geared towards the car traveler. This meant walking a half mile to the Taco Bell that looked like it was just over there. Everything is spread out and businesses are set way back from the road. After calling home, eating, and doing a partial resupply at Wal Mart, I had spent over three hours in town. I went to the end of town to hitch, but had no luck. I got plenty of people doing the cheeky thumbs-up response to my hitching thumb, and someone screamed at me to "just walk". So just walk I did, crossing the narrow-shouldered bridge that I had been trying to avoid. Moral number two: don't hitch near an interstate, or in PA; I'm not sure which.

I hiked the remaining miles to my stopping point during the late afternoon. My guidebook has some mile markers that are clearly off. At times it seemed I reached points earlier than expected, and at others I was way later than I had planned. I managed to make it to Eagles Nest for a water refill; it was still a little shorter than I wanted to stop. I got to a point where I was ready to call it quits and began looking for one of PA's ubiquitous trailside campsites. I found one and set up my tent, joined later by a friendly section hiker. It just so happens that I am 30.2 miles from a shelter. This sets me up for my first 30-mile day. I have had two days over 29 miles, but this will be my first o-fficial, honest-to-goodness 30 as long as everything works out. I'll find some funny way to document the occasion. 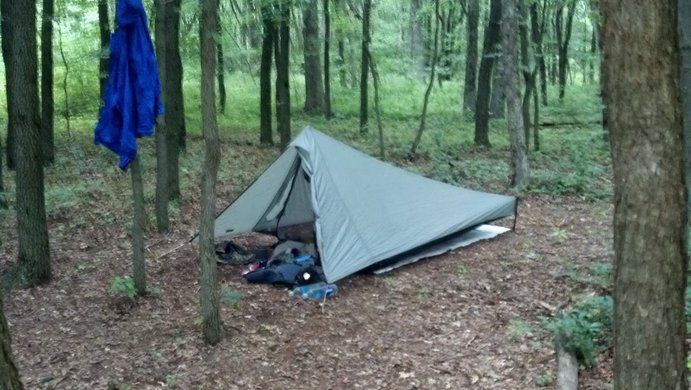